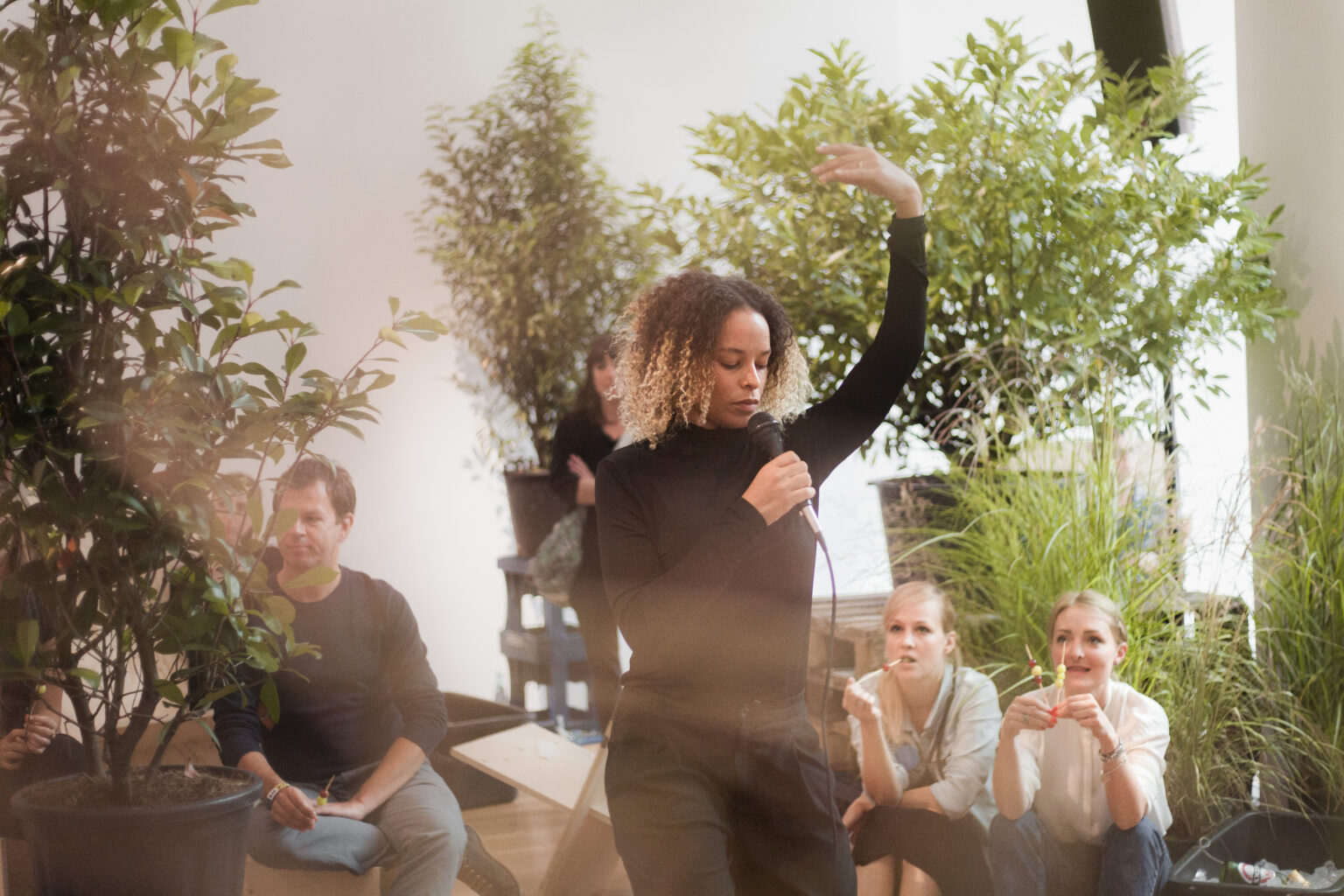 How does it impact on space when people dance in it? How does the body behave in space, how does it move? How does it affect it when others dance?

Considered celebratory gatherings of things, people, plants, dances and scents, Occasions – a format created by Isabel Lewis in 2013 – takes place in a decorated environment where visitors can drift in and out of attention and sociality. A choreographed space that defines the movements in it and influences the people enclosed in it by bringing the installation to life with their own movements. Lewis unfolds a specific dramaturgy attuned to her guests and their energies shaping a live experience using choreography, music, spoken address, and storytelling in ways that allow for conversation, contemplation, dancing, listening, or just simply being. Easing the formalities of distanced observation typically found within the theater and exhibition contexts, Lewis is interested in aesthetic situations that move beyond the merely visual where the entire human sensorium is addressed. Within the Occasions, visitors encounter smells made in collaboration with Norwegian smell researcher Sissel Tolaas and are welcomed with amuse-bouches created by a local chef. Occasions take place in the foyer of Stoa, and it is created in participation with Helsinki-based dancers.

Sonja Karoliina Aaltonen (she/her) is a dance artist and performer based in Helsinki. Aaltonen is currently studying her MA of dance performance in Uniarts Helsinki, and she has BA in dance performance from Stockholm University of the Arts (former DOCH, 2021). Previously she has studied dance in Tampere Conservatoire (2019). Aaltonen has integrated theories of performative into her work, and she is highly considered on the question of how we are being conditioned? How are our experiences of ourselves, others, and the world constantly affected by coexistence, contexts, interactions, and experiences? Throughout her studies she has worked and gained experiences with artists such as Amanda Piña, Cristina Caprioli, and Salva Sanchis.

Sofia Charifi (she/they) is a Helsinki-based artist and performer. She has studied dance in Berlin and continued her studies in the University of the arts Theater academy’s dance department. During her studies she served as the chair of the student union board and contributed to matters of equality and diversity within the university. Sustainability and endurance act as the basis of her artistic processes, with kindness and curiosity as important values.

Giorgio Convertito is an italian born dancer and dance maker based in Helsinki, Finland. He has worked since 1996 as a dancer, choreographer, teacher and facilitator, living the freelance dance artist life. In his work, he likes to create the movement material at the same moment as it is performed: the creative process of the dance maker coincides with the performative moment. The dance is produced from a place of heightened awareness and receptive streaming, a place where the dancer can recognize, identify and appreciate the moment and the elements that form it.

Elias Girod is a Helsinki-based dancer and a member of Precarious Practices. He works as a performer in the pieces of Mette Ingvartsen and in the productions of the Weld Company in Stockholm. Recently, Elias has studied the choreography of wind players’ mouths together with Linda Martikainen and Lauri Supponen, as well as worked in Veli Lehtovaara’s series of works about the evergreen forest. In December will premiere a movie on stage, Fly by Sidney Leon, which Elias stars as Vatslav Nižinski. Elias has studied in Ballet School of the Finnish National Opera and Ballet and has a BA of dance from Stockholm University of Arts. At the moment, Elias studies education theory in Helsinki University.

Kardo Shiwan is a performing artist who works as an actor and dancer in a variety of settings and ensembles. Currently, Kardo is interested in working in the intersections of cultural research and corporeality.