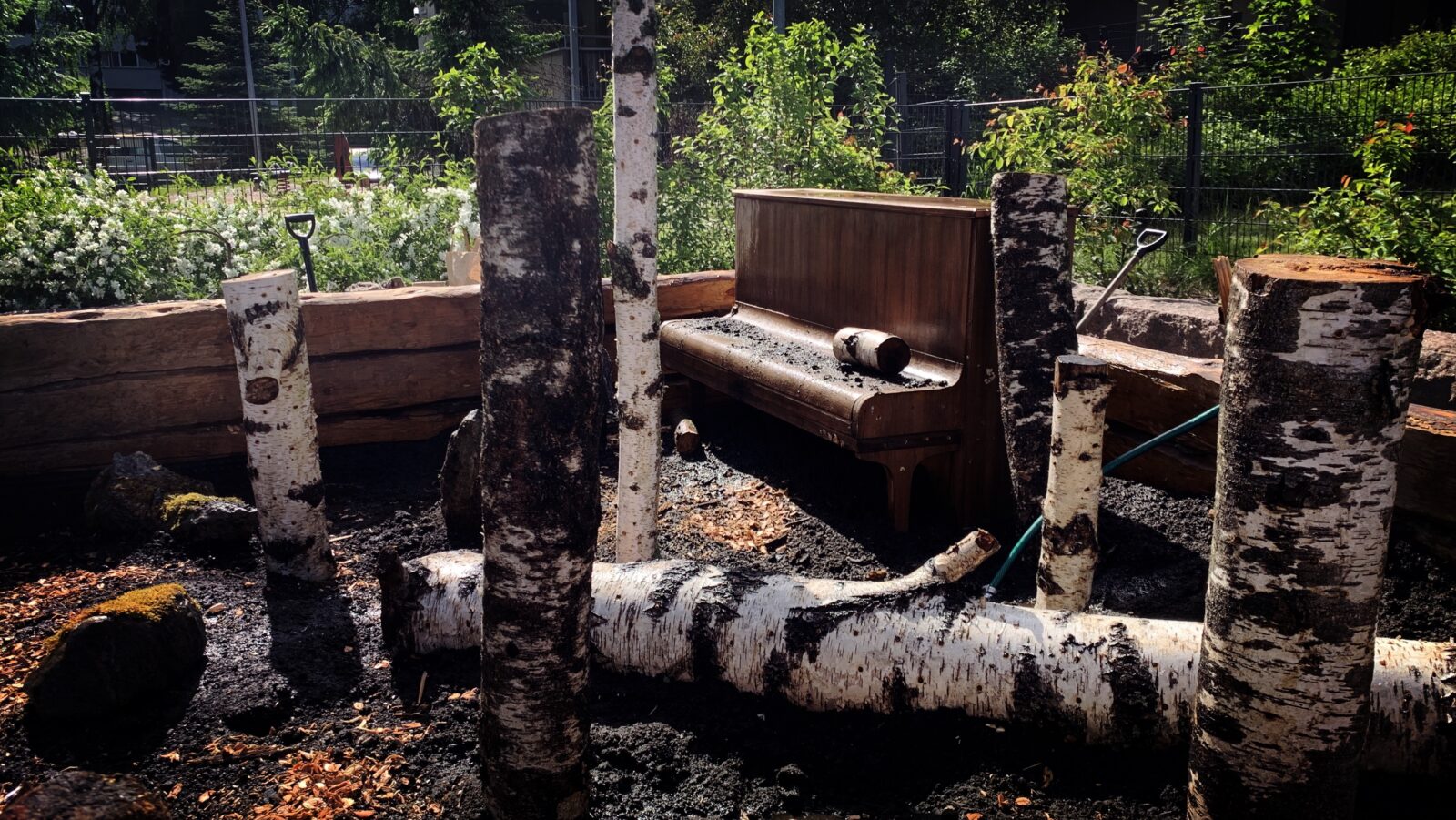 The Hut is part of Herbarium.

During the course of the festival, the fungi hut will host various offers from the team of human and nonhuman collaborators. Together they will experiment with ways of living in the symbiocene infused with life; fungi, human presences, and regenerative practices. Bodies will share a moment of falling into the sky. A piano will be played by mushrooms. A shelf will be inhabited by a friend of the fungi, and multilingual voices will echo from the four directions.

The fungi hut is a co-created living being, dedicated to the queendom of fungi which now resides in the wooden structures of the hut, the logs, the piano as well as the soil. The hut has traveled from Pomarkku to Tenhola, during a process of regenerative practices. The fungi are both invited and inoculated, as well as wild-grown. In June 2022 the hut was placed in the Stoa square, and a mushroom garden was grown with the intention to offer the fungi a space to thrive. The garden installation will be transformed into a space that will be open to the public for various forms of encounters. The Hut is an invitation to witness life forms unfolding in ways that we stand alongside, acknowledging unseen processes happening on other timescales.

Jared Gradinger and Angela Schubot offer a durational performance of embodied and musical mushroom encounters in collaboration with Stefan Rusconi who plays the hut as a hybrid instrument, together with fungi, soil, robot arms, human listening, and prepared piano. They are also joined by long-term ally Shelley Etkin, who leans towards the voices beyond language, tracking articulations that have emerged through communicative processes.

Angela Schubot is a dancer, artist, choreographer, researcher and bodyworker-healer based in Berlin with roots in Peru and Canada. Jared Gradinger is a choreographer, artist, performer and gardener born in the USA and based in Berlin since 2002. As a duo, Schubot/Gradinger’s desire is to acknowledge and interact with non-human beings and open up their unconditional togetherness to the non-human realm. The artist’s work towards a “Symbiocene” rather than resigning and settling into the Anthropocene. They want to replicate the symbiotic and mutually reinforcing life-generating forms and processes found in living systems and bring them into artistic, embodied, and regenerative practices. Since 2017, they have been “co-creating” performances with and within Nature, such as Yew: outside (2018) and Yew: kids (2019), which were seen in the Traces from November program in May 2022. These works are a sensitive plea for the dissolution of the human-nature dichotomy. They are an attempt of a hierarchy-free co-existence through reciprocal encounters and radical experimentation with plant nature.

Starting off as a composer and pianist in the fields of improvised/experimental music and Jazz, Stefan Rusconi toured for many years throughout the world with his band RUSCONI, played major festivals, and collaborated with musicians and artists such as Fred Frith, Dieter Meier, Pipilotti Rist, Roman Signer, Thomas Wydler, Thom Luz, Norma Winston, Tobias Preisig, Doug Weiss and many others. From 2015 onwards he started to create interdisciplinary work in the fields of music, nature, architecture, and movement, which became his core interest and resulted in pieces and collaborations with Meg Stuart, Jared Gradinger, and Angela Schubot among others. Stefan is Swiss-born, living now in Berlin.

Alm Gnista is based in Hangist, South-west Finland. With an aim of creating space for collaboration within the beauty of it all, Alm has worked in a mixed career of performance, teaching, working with nature and construction. Alm holds a BA and specialist vocational qualification in environmental and natural resource management.

Shelley Etkin is a transdisciplinary artist, educator, gardener, and writer. Her work engages with relations among bodies and lands through the intersections of pedagogy, somatics, plant medicines, and place-based knowledge. She is based in Berlin with roots in the U.S./Turtle Island and Israel/Palestine. Shelley comes from a background in dance and holds an MA in Ecology and Contemporary Performance (Finland), a BA in Gender Studies (USA), as well as a permaculture design certificate and is a student of homeopathy.

Performances and visitation in The Hut are free of charge. The performances are long durational (note 10th and 11th) and you can enter and exit how you desire. For the performances registration is preferred due to the very limited capacity of The Hut. You might need to wait a little to get in, but we serve soup and warm indoor space while waiting.

Register to a performance

In Co-Creation with: The soil, The moisture, The fungi (inoculated: Turkey tail, Reishi, Birch Polypore, The Hoof Fungus, The Coral Tooth fungus, The Bitter Oyster and others), The moss, The lichen, The stones, The plants, The pine, The spruce, The birch, The glow in the dark, The underground, The unseen

Produced by: Schubot/Gradinger in close collaboration with Moving in November

Supported by: Konstsamfundet, Herbarium-project is supported by Goethe Institut Finnland

In Co-Creation with: The soil, The moisture, The fungi (inoculated: Turkey tail, Reishi, Birch Polypore, The Hoof Fungus, The Coral Tooth fungus, The Bitter Oyster and others), The moss, The lichen, The stones, The plants, The pine, The spruce, The birch, The glow in the dark, The underground, The unseen

Produced by: Schubot/Gradinger in close collaboration with Moving in November

Supported by: Konstsamfundet, Herbarium-project is supported by Goethe Institut Finnland