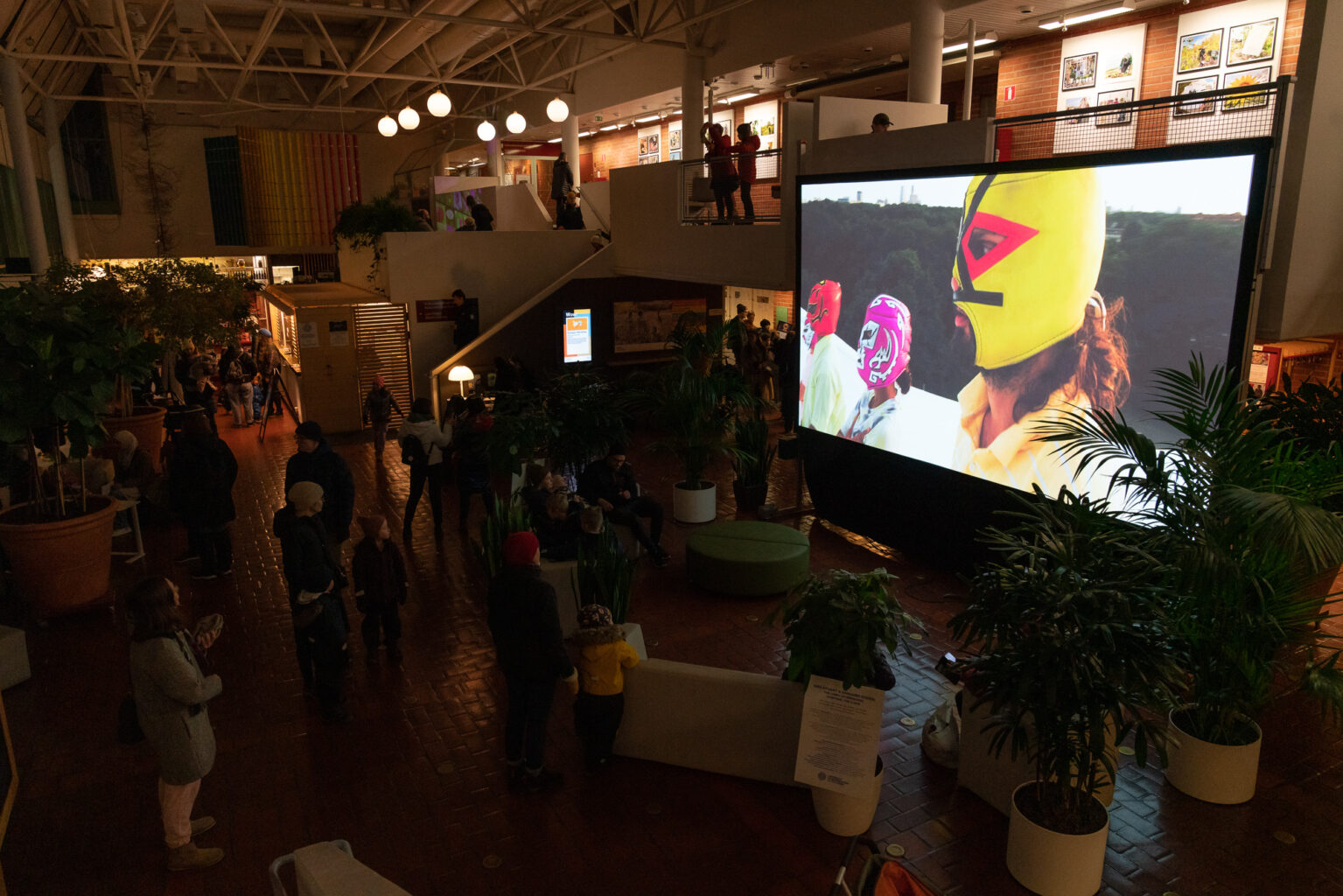 Solos and Duets is an evening carefully composed out of excerpts of already existing works and small solos and duets creating a new performance. How was the idea for this evening born, that takes us on a time travel through a significant part of your body of work?

I wanted to show Inflamável, a duet I initially made in 2016 for ‘The Greatest Show on Earth’, which was a ‘21st-century performance-circus’ produced by the Hamburg Internationales Sommerfestival Kampnagel and Künstlerhaus Mousonturm (Frankfurt am Main). This short piece had not been shown anywhere else, and I thought it would be interesting to frame it next to a duet from my evening-length piece Until Our Hearts stop, which we call ‘The Punk Girls’. We have always been doing small-scale works as well as larger group pieces, so it was a matter of shifting to a different scale and sharing the pieces with new audiences, who would not have had the chance to see these works otherwise.

This idea of transmission works on many levels. In most of my pieces, there is a solo or a duet that could stand on its own in another context. Presenting these fragments in a different framework makes it possible to strip the work down and reduce it to its essential qualities.

As a program, Solos and Duets is so tight, and the pieces work so well together, that they really started to speak to each other. They connect in ways that aren’t obvious and offer another way of looking at those connections. For instance, the two duets (Inflamável and The Punk Girls) seem like total opposites. Inflamável is very stylized, with elaborate costumes and a sci-fi atmosphere, whereas The Punk Girls has a bare-bones setting. But they are both about a desire to connect, a longing, and a kind of friction. In each of these duets, the two dancers create a bubble of intimacy, so that they form a world unto itself – in that sense, the pieces are almost like a short story. The solos Oh Yeah Huh (a fragment from the 1995 piece No One is Watching) and Signs of Affection are also connected, insofar as they are both dealing with loss, erasure, desire, impossibility… The only one that kind of stands on its own is Maria Scaroni’s solo from Built to Last, which works on the notion of set and reset, a continuous shifting and transforming. When we created this solo Maria used the 1978 video of Yvonne Rainer’s Trio A as a starting point. Trio A is an allusion to how art can survive as a living archive, as a constant work-in-progress. So this solo aligns with the themes and materials of Built to Last, but it also works by itself.

In your work you often build communities with the artists on stage, almost like parallel societies to ours. Could you speak about this process and the research and desire when starting a new creation?

It’s a very intensive process, where we start with very little. We’re all sharing the same risk. Often we are in spaces where we’ve never been or doing actions that we haven’t done before, during a compressed period of time. That means that we’re also trying to transgress our normative way of doing things and of working together, which makes us quite interdependent. And in that container and exchange of ideas, we often ask for input from others.

I don’t know if it’s a parallel community, and I don’t know if it’s that different from how anyone else makes their work, to be honest. My collaborators bring their history, their aesthetics, and their questions with them, and that affects the process. We know that we meet through healthy tensions or dialogues, and not just through shared agreements. This dialogue shapes the work and creates collective questions that are open to a broader community.

Often, my works build on each other, so you could think of them as spin-offs of other dialogues or collaborations that continue to grow and deepen over the years. That is the case, at least, for the artists that are involved in Solos and Duets.

I try to look at people as a whole, and to take into account not only what happens in the studio, but also outside of it: the moments when we hang out together, or go on an adventure together, carry their own creative potential. Maybe it’s the process, or maybe it’s the kind of people that gravitate towards the work, but I find that these creations are very bonding. And because there is a lot of improvisation in the creation process, until the last minute and even during the piece, it feels as if this process is always fresh. It’s renewed and remade, every time we do it.

Parallel to Solos and Duets we are presenting video works by you in the foyer of Stoa. It was made in 2020 as a response to the current state of the world. Four videos situated at different sites in and on a mythic building in Berlin. A study on aloneness, togetherness, emptiness, hope, and the unknown?

This series of four videos, The Lobby, Intermission, Overtime, and The Clock, was commissioned by the Haus der Kulturen der Welt for an online ‘exhibition’ called CC:World. They are also about resilience, and about being connected over distance. Barbara Raes’ term – ‘unacknowledged loss’ – seems very apt here: during those first covid waves, people were dying, and it was not possible to honor or process these deaths as we normally would. Rituals were disrupted. Our habits were questioned: habitual connections, rituals, or gatherings that marked arrivals and departures, disappeared for a while. Of the four videos, The Clock addresses this most explicitly.

It was also very special to use a part of a cultural building which we wouldn’t be able to access under other circumstances. We performed for the clouds instead of an audience, and we used the lobby – normally a meeting point – to meet through our fantasies, imagining those things which were no longer taking place in the world. That brought a bittersweet sense of longing to the work.

However, these video works are not just about the loss and disorientation that we all felt during that time, they also have a lightness, a sense of humor. After all, Covid also opened up new possibilities; it allowed us to dream differently and to imagine new ways of life. When you see the dancers reaching for the sky, they are also reaching for that.